Why did I become a nutritional researcher for more than 20 years? 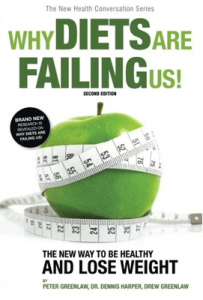 My name is Peter Greenlaw and I have been called the researcher of researcher for more than 20 years. I am quick to point out that I am not the expert, but I became an expert on the experts. As I have been blessed to work with some of the top medical doctors, geneticists, molecular biologists, and nutritional chemists, in the world. What they taught me is what I have been able to make the world aware of.

How did this quest begin?

My journey started as the result of a phone call from my mother more than 20 years ago. My mother was morbidly obese my whole life. She was never thin and most importantly never healthy, but I loved her dearly.

She called me up one day and said Peter I have one wish in my life before I die (she had no reason to believe she was going to die). I said what is that mom? She said I would give anything if I would spend 24 hours thin. Mom never got to realize that dream as six months later a massive heart attack and stroke caused her passing.

My mother had done almost every diet there was. Cutting them out of tabloids at the supermarket or from seeing them on TV.

It was always the same she would lose 15 lbs. and gain back 20. This occurred over and over again.

When mom passed, I became so angry that I said something is terribly wrong with diets. It made no sense to me that whatever my mom tried like so many others that something was not working. My mom would attend weekly meetings as she really wanted to be thin. Over and over again she would do well and then sometimes in a matter of days, she would gain back all she had lost.

That led me on this 20-year quest to talk to the researchers and those looking for the answer.

I have now written four books all with M.D. the first one which came out in 2010 was called Why Diets are Failing Us, which led to more discoveries to come up with why diets fail in the long run.

Now after more than 20 years of interactions with these world-class experts there finally is a scientific peer-reviewed study of a revolutionary breakthrough that is the silver bullet for safe, rapid weight loss that is backed up by two recently published peer-reviewed studies. Also in the past year major medical journals such as the New England Journal of Medicine, Journal of American Medicine, and the Nutrition Journal, conducted their own peer-reviewed studies of all the major diet protocols you see on T.V. and the internet. They also looked at the big rage Intermittent Fasting as well as the Paleo, Keto and Mediterranean, and many other variations that we see popping up all the time.

The results of the studies on diets in general after 12 months was 16 lbs. in a year. The conclusion from the Journal Studies was that these results were good and acceptable.

That is exactly the problem. There is now evidence from a study done at the University of Minnesota that says the one guarantee you have on a diet is that you will gain weight.

There is great scientific proof that there is a breakthrough in these two recently published peer-reviewed studies in the Obesity Journal and the Nutrition Journal where men and women lost an average of 16 lbs. in 30 days. These results were 12 times what all the other studies showed. The other amazing fact is that people in these two studies were not allowed to exercise because they did not want this to be an outlier. The other findings were also remarkable in that every participant gained between 4 and 5% lean muscle mass. And, if that was not great news the health benefits were amazing. The CDC revealed a study that estimates that 88% of people in the U.S. is metabolically unhealthy with one of five factors, overweight, high blood pressure, high blood sugar, high cholesterol, and high triglycerides. In this peer study all five of those factors came down in just 30 days.

Although this was not available to my mom who I believe could have gotten her wish and it is now available to all of us.