My Brother Patrick did not get a Doover: 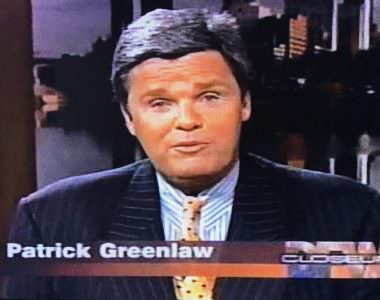 Along the way, as my research journey unfolded, several people I highly respected encouraged me to persevere and continue digging. They sensed that I was on to something important, which was the validation I needed.

My younger brother Patrick became one of these sources of inspiration.  Patrick had been a prominent television news anchor on CNN and other broadcast stations throughout his 25-year career as a public figure. In 2011 Patrick had what we thought were just chronic back pains.

I finally convinced him to see an orthopedic doctor for an MRI. It was a beautiful Colorado Monday morning with a brilliant blue sky and bright sun, as I waited in the reception area while Patrick met with the physician. A nurse came to tell me that Patrick needed to see me. When I opened the door and saw Patrick, a 6´5˝ man, double over crying. I knew immediately something was horribly wrong. He got up, hugged me, and said the doctor had found a massive tumor on his spine. The rest of that day is a blur. We learned from an oncologist that Patrick had a stage IV malignant tumor—the size of a baseball— wrapped around his spine, and if he did not have immediate surgery, it would paralyze him. Patrick had surgery four days later and immediately began chemotherapy. His surgery lasted more than eight hours, and the doctors removed the bulk of the tumor. Unfortunately, he continued to deteriorate, despite the surgery and medical treatments. He was hospitalized several more times from the side effects of his chemotherapy treatments, and eventually, he underwent radiation therapy as well.

The last night I visited with Patrick in the hospital, it was obvious he wasn’t going to receive a second chance. Although he was valiantly fighting to stay alive, there would be no do-over. Only eight short months after the tumor was discovered, we were told there was nothing more that medical specialists could do for him. Patrick and I spent a night I’ll never forget in his hospital room before he went into hospice. We talked for several hours about our lives, our gratefulness for everything we had, and how much we wished we could have do-overs regarding so many things in life. We laughed and cried as brothers in a way that we never had before. Patrick said several times, “I can’t believe I’m going to die.” He cried deeply, and the emotive force of it broke my heart.

I had just told him that I would cancel my next week’s speaking tour to spend more time with him when the most prophetic words came out of his mouth.

He stunned me by saying, “Peter, what you’re working on is a news story, a really big story. I don’t want you sitting around here watching me die. I want you to go out and tell the world what you have discovered. It’s your job to make the world aware of what’s happening and what’s possible. Because, if there is one person who can have a second chance before it’s too late for them, do it for me.” I had great respect for my brother and his encouragement inspired me to summon the dogged determination that I needed to carry on.

Reluctantly, I left him and flew out to speak that Monday morning, the same day they transferred Patrick back to his home for hospice care. On Friday night, 30 minutes before I was scheduled to speak in Washington, D.C., I received a call from Patrick’s wife, Debra. She said, “Peter, talk to Patrick. He is in terrible pain. Tell him to stop fighting.” Although I wasn’t even sure he would understand me because of the morphine he was taking, I managed to tell him through my tears, “Patrick let go. It’s okay. Debra and your daughter, Brittany, will be okay. You have suffered enough.” Debra thanked me, and I went on stage to speak at 7:00 p.m. Unbeknownst to me, while I was on that stage, my wonderful younger brother Patrick passed away.

Telling this story is still extremely emotional and painful for me. There are some nights when I still break down in tears when I talk about Patrick. Hopefully, you can sense the depth of my passion and my driving need to spread this message. If I could have known what I now have come to understand, maybe, just maybe, that knowledge could have given Patrick a second chance.

Unlike my brother Patrick, it may not be too late for you. Yes, you may really get a second chance, a do-over, or a reset. If you have loved ones who have become health statistics, and you have seen firsthand their suffering from the onslaught of systemic health failures then you know how that experience can smother you into a shocked silence, feeling helplessness and despair. Or the experience can change you and inflame you with a burning passion to launch your own health crusade, so the agony of disease isn’t visited upon another single human being.

As you probably sense by now, I emerged from these wrenching experiences setting an intention to change the world with what I have learned from the world-class experts I have worked with. I am not claiming to treat, diagnose or prevent any diseases. My research has shown me sound strategies that are backed by peer-reviewed medical studies that can support your own body in staying healthy. That should be the goal for all of us. Why not do everything possible to support our immune system for example?

If you’d like you can find out more about these protocols.

For more information on the protocols please click below.