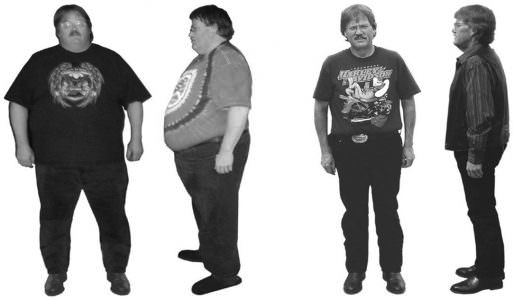 As Mike stated to me, describing why he took the step to change the direction of his life, “I made the decision to recapture my health.” Looking back, Mike Townsend may not have even realized at the time that a phone call to get some information on a nutritional fasting program would propel him into a rebirth—and a second chance at a healthy life.

We first met Mike several years ago when he was desperate for a change. After trying countless programs promising extreme weight loss by using everything from diet pills to support groups. Nothing had ever worked for him and he came to us as skeptical as anyone. He had literally tried everything on the market and had seen little to no results. Reluctantly, he agreed to try the program for a week.

“Just the week before,” said Mike, “I had spent several hundred dollars on a weight-loss program, which I had already returned. In fact, when this new package showed up, I called the number I was given to see how I could return the stuff, as I already knew it wouldn’t work. The lady who answered that call gave me just enough inspiration to try it and, ultimately, it helped change my life.”

The lady Mike spoke with was one of our Solution Advisors, and she convinced him to get through the first four days before making his final decision. Those four days made enough of an impression that, three years later, he has completely changed his lifestyle.

These days, you won’t catch Mike flipping through television reruns. In fact, you might not catch him at all, as he averages between 20- to 30-mile bike rides each day, when the weather cooperates. Since May of 2012, he has ridden more than 5,500 miles on his road bike. Three years ago, the idea of getting on a bike would not have crossed his mind. Not only is Mike an avid bike rider but also he found a second home at the gym, working with a personal trainer, and has completely switched his dietary needs. In less than a year’s time, he lost 170 pounds. Even more important, after three years, he has managed to keep off the weight.

Mike offers insight to others who want to take a similar path: “Every day is still a battle. I still deal with a fat man’s mentality. I don’t know if I will ever be the person who can eat just one. Three years into this program and I still slip. I will do really well for seven or eight weeks and then have a week where I want to eat everything in sight. Luckily, I know how to regain control now. I have also learned so much through this experience that guilt plays a positive role where I can use it to launch me out of a funk and back on track. For me, one of the biggest elements of this program is that I still can enjoy food in moderation. And, if I get sidetracked, I know what I need to do to get right back to where I want.”

“For years, I was stuck in my own deception. I would look in the mirror and not see the person who was really staring back at me. I didn’t become majorly overweight overnight. Every year, I would put on 10-15 pounds. When it happens like that, you don’t notice how big you are really getting until 20 years down the line. I also knew that going into this program, I wasn’t going to lose all that excess weight quickly. All the other programs I had tried just did not satisfy me, results-wise. It was hard to cut calories and meals or work my butt off in the gym to lose a pound here and there. After just a couple of weeks on this solution, I lost a double-digit percentage of weight! I was so excited that I forgot how it was actually working; I just kept doing it!”

After six months on the program, Mike Townsand has never looked back. He lost almost a pound a day for the first six months. Because of his dramatic weight loss, Mike now faced a new problem: purchasing a new wardrobe. He went from a size 54-inch waist to a 34! Today, he still fits happily in his 34-inch jeans.

Mike went from eating two, foot-long sub sandwiches, a family-size bag of chips, and a 64-ounce soda for lunch, to blending up a nutrient-dense protein shake and noticing the same satisfaction. To say he has changed his lifestyle is an understatement. Mike is also proof that this solution is not a one-hit-wonder. After the course of three years, with all the trials and tribulations that life throws at someone, he is living proof that following the guidelines laid out in this book really does work.