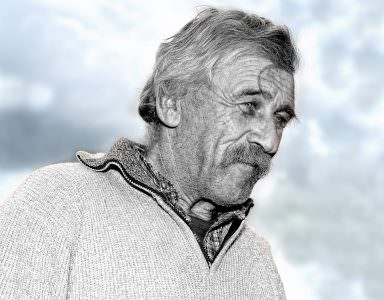 “I want to cure my aging, my friends’ and family’s aging, my investors’ aging, and I want to make a ton of money,” Andrews says. His return to running after a middle-aged break was, he says, inspired by a revelation he had at a time when he and a small team of scientists at his biotech start-up, Sierra Sciences, had been working 14 to 18 hours a day in the lab for five years, rather obsessively pursuing a particular breakthrough. Finally, his doctor told him he was headed for an early grave. “I thought, god, I don’t want to cure aging and then drop dead,” Andrews says.

That would indeed be ironic. Because Andrews does intend to cure aging. This stated ambition induces in some listeners the suspicion that Andrews might suffer from delusions of grandeur, but he has a scientific pedigree that insists he is taken seriously. Unlike his friend Aubrey de Grey, the University of Cambridge longevity theorist who relentlessly generates media attention with speculations that straddle the border between science and science fiction, Andrews is an actual research scientist, a top-drawer molecular biologist.

In the 1990s, as the director of molecular biology at the Bay Area biotech firm Geron, Andrews helped lead a team of researchers that, in alliance with a lab at the University of Colorado, just barely beat out the Massachusetts Institute of Technology in a furious, near-decade-long race to identify the human telomerase gene. That this basic science took on the trappings of a frenzied Great Race is a testament to the biological preciousness of telomerase, an enzyme that maintains the ends of our cells’ chromosomes, called telomeres. Telomeres get shorter each time a cell divides, and when they get too short the cell can no longer make fresh copies of itself. If we live long enough, the tissues and organ systems that depend on continued cell replication begin to falter: The skin sags, the internal organs grow slack, the immune-system response weakens such that the next chest cold could be our last. But what if we could induce our bodies to express more telomerase? We’ll see, because that is what Andrews intends to do.

The embrace of fitness has for Andrews a telomeric logic. Make poor lifestyle choices, and you’re likely to die of heart disease or cancer or something well before your telomeres would otherwise become life-threateningly short. But for the aerobicized Andrews, for anyone who takes reasonable care of himself, a drug that activates telomerase might slow down the baseline rate at which the body falls apart. Andrews likens the underlying causes of aging, free radicals and the rest, to sticks of dynamite, with truncated telomeres being the stick with the shortest fuse. “I believe there’s a really good chance that if we defuse that stick,” he says, “and the person doesn’t smoke and doesn’t get obese, it wouldn’t be surprising if they lived to be 150 years old. That means they’re going to have 50 more years to be around when somebody solves the other aging problems.”

Doctors tend to look at bodily decline through the prism of so-called diseases of aging, our increasing susceptibility over time to killers like cancer and heart disease. But in the 1950s, research biologists began to view aging itself as a disease. When free radicals scavenge electrons from their neighbors, they set in motion some ugly chain reactions. Cholesterol molecules become oxidized and begin to interact with the artery walls to form atherosclerosis-causing plaque, for instance, or the DNA in the cell nucleus suffers mutations, laying the groundwork for cancer. Later refinements of this theory emphasize the role of the mitochondria, the cellular power plants that help convert glucose into energy. As the mitochondria age, they spew out increasing amounts of the free radicals that hamper energy production and damage the entire cell, accelerating our all-systems decline.

Among cell biologists, these mechanisms remain to this day the most accepted ways of explaining what’s happening to that face reflecting back at us in our bathroom mirror. But telomere science has opened up the possibility of drilling even deeper into the molecular bedrock of aging. The fledgling field was energized in 1984 when biochemist Elizabeth Blackburn of the University of California at Berkeley and her then-grad student Carol Greider discovered the telomerase enzyme in a pond-scum protozoan, an achievement that won them a Nobel Prize. Since then, our picture of human telomeres and telomerase has sharpened considerably.

“A magic pill?” says Nobel Prize winner Elizabeth Blackburn. “I think we’ve been there about a million times before. “Telomeres are made of repeating sequences of six DNA bases—two thymine, one adenine, three guanines (TTAGGG)—that serve to “cap” chromosomes, preventing potentially cancerous breaks; the analogy usually trotted out is the plastic aglet that prevents a shoelace from fraying at the ends. Telomeres also assist cell division. Every time a cell splits, the ends of its chromosomes fail to get fully copied into the two new daughter cells, and a bit of telomeric DNA gets lost. No harm is done to the rest of the chromosome, but in cells that divide frequently, the telomeres shorten with each replication. Telomerase’s job is to synthesize new DNA to add to the shrinking telomeres, slowing down the decline.

Human life, it turns out, is a losing effort to hang on to our telomeres. At conception, telomeres have roughly 15,000 DNA base pairs. Because telomerase can’t keep up with rapid cell division in utero, they shrink to about 10,000 base pairs at birth. At that point, the telomerase gene is mostly turned off. Without the enzyme, we continue to lose telomeric DNA—once we’re out of our teens, usually at a rate of 50 base pairs a year. By the time some of our telomeres drop below about 5,000 base pairs, typically well into our “golden” years, our cells may have lost the ability to divide. They become senescent, bad at doing the work they were designed to do but good at doing things like releasing inflammatory chemicals that harm their neighbors. Or they may be targeted for cell death.

Andrews sounds almost giddy when he describes the “aha” moment 20 years ago when he first heard his soon-to-be boss at Geron, pioneering telomere biologist Calvin Harley, lecture about telomeres as a “mitotic clock,” in which the steady shortening of the telomeres serves as the tick-tock of the aging cell. “I was floored,” Andrews says. He found the lockstep precision suggested by the metaphor irresistible.

Cultured in the lab, cells can divide just 50 to 70 times before packing it in (this is known as the Hayflick Limit, after longevity-research eminence Leonard Hayflick, who discovered the phenomenon). The human body is significantly more complex than a petri dish, but some similar limit must be enforced there, Andrews says, to account for the fact that the maximum human life span is so tightly regulated, with the longest-lived humans making it to 100 and, to the best of our knowledge, nobody surviving past 125. If free-radical damage were really the primary driver of aging, he says, people’s rate of bodily decline would vary widely based on the amount of environmental damage they had absorbed, a major contributor to the free-radical load, and therefore so would their maximum life span. “But you can look at a person and have a 95 percent chance of guessing their age within five years,” he says. “There has to be some kind of internal clock ticking inside of us.”

Biologists continue to debate the extent to which aging at the cell level determines the aging of the whole organism. Most have argued that short or damaged telomeres aren’t as big a deal as Andrews, or even the more measured Harley, make them out to be. Tissues and organ systems that depend on cell division have a fair amount of reserve capacity, and the cells that seem to play the biggest role in our decline, neurons, and heart-muscle cells, hardly replicate at all.